By now your garden should be looking pretty full. The rains have kept the plants flourishing. It has been a good year for growth to say the least. You might be saying, “Gee, my garden looks so nice, lush and perky, I wish it would look this good in August and September.” There is a garden practice that can help you to achieve this, the “June Prune.”

Pruning in June can be a difficult thing to muster up. The plants are looking really good, all lush and beautiful, and you are going to what? Cut them? In half? Really? Yes, cut them. Cut them back by one half, and they will branch out and look fantastic in about three weeks. Good candidates are helianthus, heliopsis, asters, chrysanthemums, amsonia, eupatorium, veronicastrum, tradescantia, vernonia, nepeta, and most any plant that gets over three feet tall by the end of the season. I know it’s hard, but you will be happy you did it. It is getting to the end of the best time to do this, so hurry outside and give all those tall or potentially floppy perennials a good haircut. Experiment with it. Not sure if you will like the results or if a certain plant is not a good candidate? Cut a portion of the plant and see what happens. If you like, it cut all of it back next year.

One plant that I experimented with that has become a usual practice because I like the results so much is cup plant, Silphium connatum. Silphium connatum is a tall native with sunflower flowers on top of 5-6’ tall, sturdy stems. The butterflies adore the nectar from this plant, and the birds love the seed that develops in the fall. I have seen dozens of swallowtails on a single plant at one time. Because I like free birdseed and watching birds in the garden, I let cup plant go to seed. This means I will have volunteer plants. One year a cup plant came up right next to the walkway. I liked the large, somewhat fuzzy leaves in contrast to the black mundo it had come up through so I left it. As the season progressed it began to send up a flower stalk. Now what had been appealing became a bother as we walked by. It was just too big. It was either move the plant or cut it. I was busy, so I cut it all the way to the ground leaving the initial flush of leaves that I was originally so enamored with. About a week or so later it sent up several more shoots and bloomed at a very manageable three feet. Not only was the size more agreeable for a smaller garden, the butterflies were easier to observe as they busily harvested nectar. Lesson learned! So hurry up! Chop! Chop! 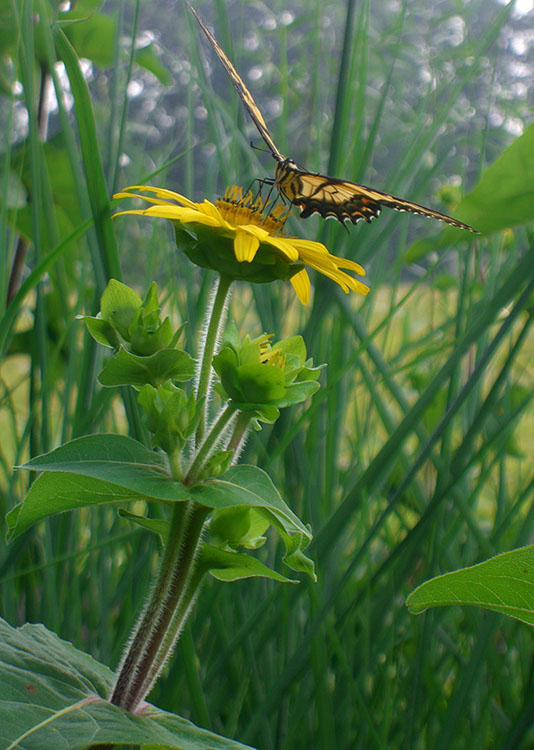 Subscribe to get the latest about our Plants and Events

0
0
Your Cart
Your cart is empty
Continue Shopping